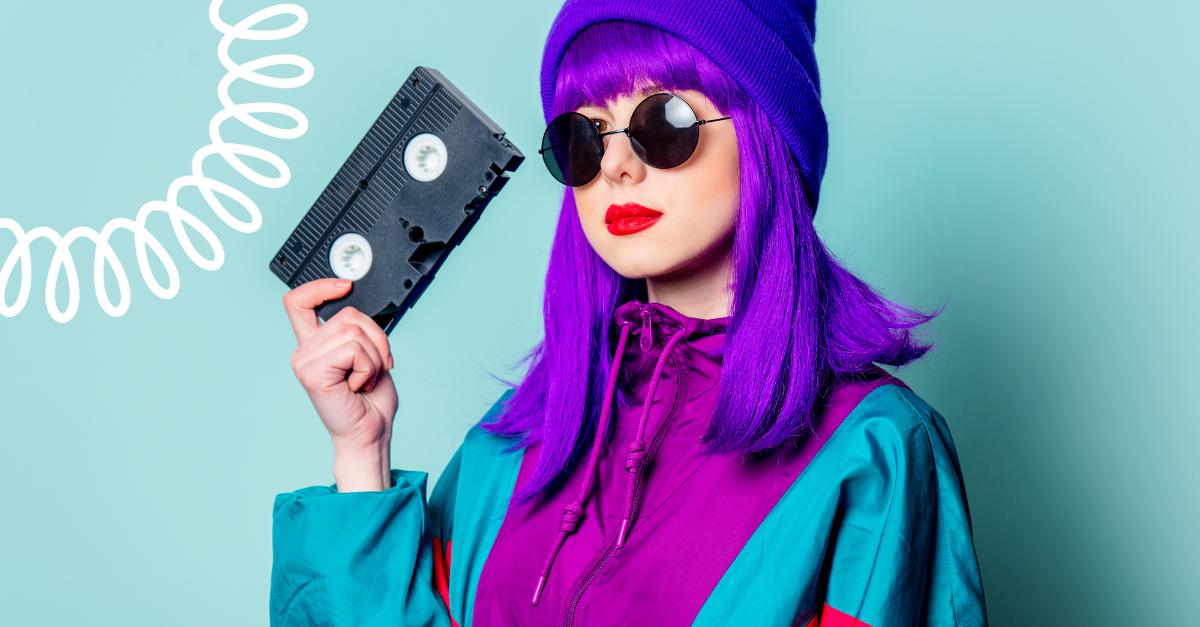 “Nostalgia – it’s delicate, but potent… It’s a twinge in your heart far more powerful than memory alone… It takes us to a place where we ache to go again.”

We’ve been reminiscing a little lately, ourselves.

But according to research from YouGov and the The7Stars, it’s not just us. 55% of those surveyed would choose to return to the past if it were possible to time travel. Not only that, millennials say they reminisce about the past more frequently than older age groups.

And what about people who enjoy being reminded of the past in ads? Well, they’re also more likely to say advertising helps them make purchase decisions.

But advertising through the rose-tinted glasses of nostalgia isn’t anything new - content creators have been using this device to catch us in the feels for generations. Recently, it’s been the 80s they’ve been infatuated with; we’ve seen everything from animatronic Arnies and pop-guzzling gremlins to apparition accountants and time-traveling trainers.

However, we’re now seeing a shift.

Of those surveyed by YouGov and The7Stars, the 90s is the era that’s most fondly remembered today.

Because the nostalgia pendulum’s started to swing.

The nostalgia pendulum - or 30-year cycle - is basically when consumers come of age and start shaping the culture themselves.

Patrick Metzger discusses this phenomenon in ‘The Nostalgia Pendulum: A Rolling 30-year Cycle of Pop Culture Trends’ for The Patterning. Talking about how consumers become creators and take artistic inspiration from memories, he says:

He argues that since most fashionable creators around them grew up in the same period, they start mirroring each other’s work. It creates “...a kind of feedback loop where all parties involved want to contribute more and more work that revives that same zeitgeist,” says Metzger.

But as we know from the data, this desire to look back isn’t confined to creators; there’s an appetite from consumers, too.

“After about 30 years, you’ve got a real market of people with disposable income who are nostalgic for their childhoods. So artists working in popular mediums are rewarded for making art that appeals to this audience,” argues Metzer.

And that gives content creators a real opportunity to market nostalgia - to varying results.

Marketing memories – the good, bad and ugly of nostalgia ads

With so many advertisers jumping on the DeLorean with time-travelling trends, marketing nostalgia has become big business for brands. But marketers should approach with caution.

When marketing nostalgia, it’s a precarious balancing act between style and sincerity.

For example, the recent Wayne’s World spoof from Uber Eats certainly looks the part. But there’s something undeniably tragic about two middle-aged men masquerading as teenagers for TikTok videos. On top of that, some of the irony from the source material seems lost in translation; or lost on generations, in fact.

“One of the great Wayne’s World jokes was a very Generation X one: Advertising was so inherently shameless and embarrassing that the only way to satirize it was to steer into its inherent cravenness and insincerity,” says Will Leitch, writer at Gen, in ‘Why the Wayne’s World Super Bowl Ad Makes Me Sad’.

The gag in question is where Wayne and Garth try to sneak as many corporate sponsors into a bit as they can, making a mockery of product placement in the process. Whether Uber Eats’ message of “eat local” is sincere or not feels almost irrelevant; you have to wonder whether two characters that are so committed to not “selling out” would ever support a business model that’s been so heavily criticised.

Right now the 90s may be back in fashion. But if you’re going to revisit the past, it should always be a respectful rendition.

Arguably, more effective is Volvo’s C40 Recharge ad. Using Kavinsky’s ‘Nightcall’ from 2011’s Drive might not feel like the 30-year cycle in action but, when you consider director Winding Refn’s reference points were already retro, it makes sense.

It’s no secret that music triggers memories. And for Helen Rose, head of Insights and Analytics at The7Stars, rhythm is the answer for marketing with nostalgia.

“For Brits, music is the number one cultural association across all decades – so think carefully about your soundtrack,” she says.

Mining the eras of popular culture throughout their campaigns, Halifax has now landed on the 90s with their latest ad; one that uses Oasis’ 1997 hit ‘Stand By Me’ to soundtrack its visuals.

But this trend in nostalgia marketing isn’t limited to video; it’s shaping design principles, too.

Take Burger King for example: this new ‘flat design’ logo nods to the fast food chain’s roots but is actually far similar in colour palette to its 1994 logo.

Released, you guessed it, almost 30 years ago.

"The redesigned logo reflects a new era for Burger King and its commitment to fresher, cleaner ingredients is best represented by looking back to simpler, less processed times," said Debbie Millman, one of the designers behind the 1999 logo version, in conversation with Insider.

Sometimes for a brand to move forward, they must be prepared to revisit the past. Just be sure it’s a journey based on stats - not sentiment.

Tapping into time – using the past to push your brand forward

Like any marketing that’s worth its salt: good creative starts with data.

Mark Ritson, Virtual Marketing Professor, believes that a ‘brand diagnosis’ is the key to healthier marketing. And this begins with taking a nostalgic deep-dive into the organisation’s history.

“Your priority in those first six months is doing the diagnosis and getting your data together to work out what’s going on with the brand,” Ritson told brand managers during this year’s Festival of Marketing (as reported in MarketingWeek).

He says that taking the time to research the history, whilst “...gathering secondary data, loyalist research and segment groups,” can make all the difference when marketing your brand; Co-Op did a great job of revisiting the past to subtly change its style and restore public perception of the brand.

And often the data you’re looking for is right under your nose.

For example, nostalgic-marketers can learn a lot from Netflix’s approach to creating Stranger Things. Drawing from a huge data pool of viewing statistics, the show was produced based on an analysis of what was already successful.

“It has all the makings of a hit because it was designed that way,” says Team Trivera in ‘What Can Marketers Learn from the Success of Stranger Things?’

Not only that, the show’s rollout was the definition of personalised marketing. Positioning it based on individual past behaviours, “Netflix's algorithm applied tags to capture different thematic nuances and then categorized the show to align with personal preferences,” says the team at Trivera. That means that some subscribers would find Stranger Things in a list of TV Mysteries and others after watching a sci-fi thriller.

Similarly, Spotify used its own data insight that Limahl’s ‘Never Ending Story’ is still being streamed everyday to inspire this campaign. And true to the science behind our 30-year pendulum swing, the streaming platform has now re-focused its efforts to the 90s.

Crucially, it works because they have the data to prove it.

So, however warm and fuzzy nostalgia may feel, there’s almost always some cold, hard data crunching behind it. Well, the stuff that “takes us to a place where we ache to go again,” anyway.

But dry your eyes, Don. It’s only marketing, after all.