Why the modern marketer is a designer in disguise 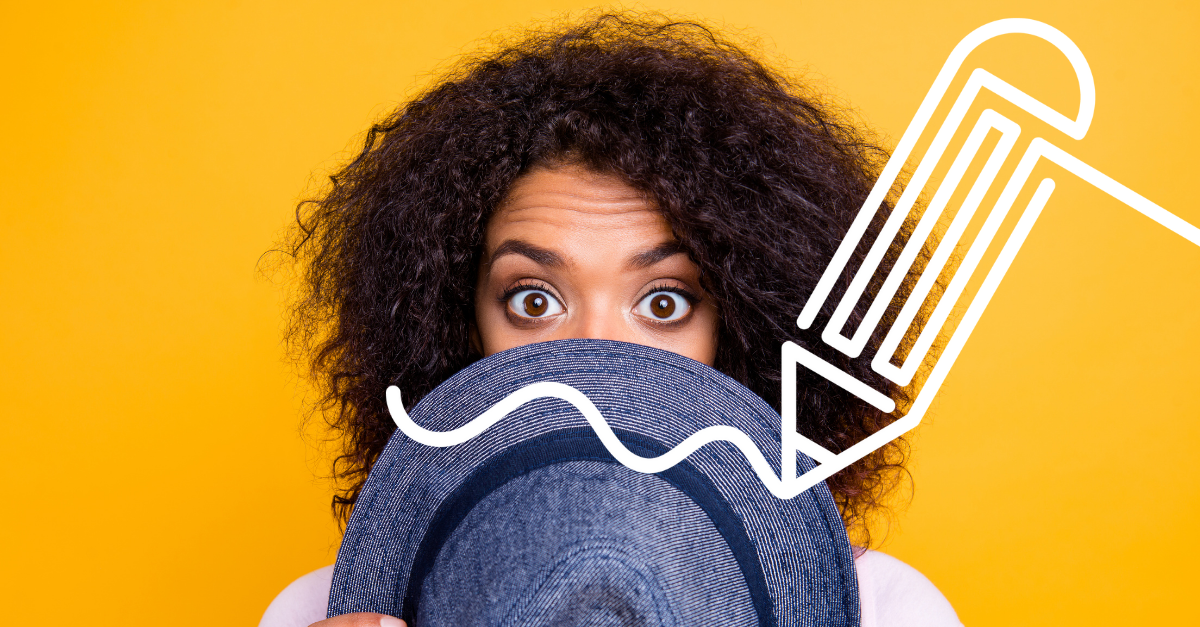 The modern marketer hasn’t got it easy. There’s the creative pressure of coming up with ideas that no consumer actually asked for, while staying ahead of the curve with technology at the same time. If you think about it, there’s no other discipline like it.

Here’s why the modern marketer is a designer in disguise.

Balancing function with flare - design without purpose is just decoration

Marketers have to do their homework to ensure their ideas have any chance of sticking. With growing content fatigue, an overexposure of adverts on platforms like Twitter and most recently, “lockdown eye strain”, get it wrong and it’s basically just noise.

Today, any content marketer worth their salt knows they have to think beyond keywords to match a searcher's intent. In fact, it’s not even enough that it reads well anymore; like designers, their work has to comprehensively solve a problem. Similarly, the modern social media manager has to combine a knack for words on Twitter; both entertaining and empathising with their audience; and a designer’s eye for curation on Instagram. No easy feat.

“Data is greater than opinion,” argues David Bach, Creative Lead at NetApp. If marketing without research is the equivalent of shouting into a crowded room at no one in particular, design without intent is just “decoration,” he says.

But modern marketers don’t just share traits with designers. Not the successful ones, anyway. Instead, they work together in harmony and even cross over into each other’s lanes.

You’ll still find the odd copywriter who’ll tell you that it’s their persuasive prose that’ll lead an online user to action. Similarly, there’s more than a few designers who think wireframing a whole landing page without a snip of copy is the way to go.

Well, according to Patrick Stafford at Invision, it’s not that simple:

“Should design start with visuals or copy? The answer is complex and multifaceted, but often the answer can be “neither.” Instead, copywriters should work with designers to provide them a narrative or content structure before they even start on a wireframe,” he said.

Whether it’s copywriting, UX, or UI design, these disciplines are all trying to do the same things: persuade a user to complete an action or stick around a little longer. And when you’re trying to reach one destination together, being open to suggestions on what’s the best way to get there seems like a sensible idea.

“Not only should copywriters let designers write copy, they should encourage it. Inspiration and knowledge can come from anywhere. Just as designers should allow anyone to sketch, copywriters should open the doors for suggestions,” says Stafford.

Arguably, this is why UX copywriting has become such a crucial profession in recent years. Modern user experience needs both design and copy to feel seamless. Done right, these tiny bits of microcopy work alongside design elements to entertain, reassure and surprise users.

Spotify’s known for its smooth and logical user experience. But working alongside those visual elements, it’s the platform’s warm, unassuming microcopy that invites you to take action.

Each stage of the user journey has been carefully considered to make the listener feel completely at ease. It’s casual and conversational but you’d barely know it was there - unless you looked hard enough. And that’s the skill.

Because if good design is invisible, copy is its camouflage.

Good morning to you too, Spotify.

The harmonious relationship between visual identity and tone of voice

When a designer starts coming up with concepts for a brand’s identity, they’ve usually already completed a pretty extensive fact-finding exercise. Studying a set of competitors, they can carve out a niche to ensure any unique value proposition shines the brightest.

But brand managers and copywriters follow the same process. Looking at archetypes and brand stories isn’t just agency guff; it ensures a brand’s character feels honest and original. For copywriters, it keeps their tone of voice consistent across all channels - from lengthy long-forms to the tiniest tweets. Like designers, they’re creating and living by a strict set of styles guidelines.

But this process is a two-way street - and that’s where the magic happens.

Graphic design company Canva references Apple as a great example of when brand identity works in harmony with product:

“The visual simplicity of Apple’s branding is aligned with the functional simplicity of its products and the uncompromisingly careful design that runs through video campaigns right down to the port for their charging cables,” they said.

You only have to look at their product copy to see how synchronised their designers and copywriters are, e.g. this MacBook Air advert. 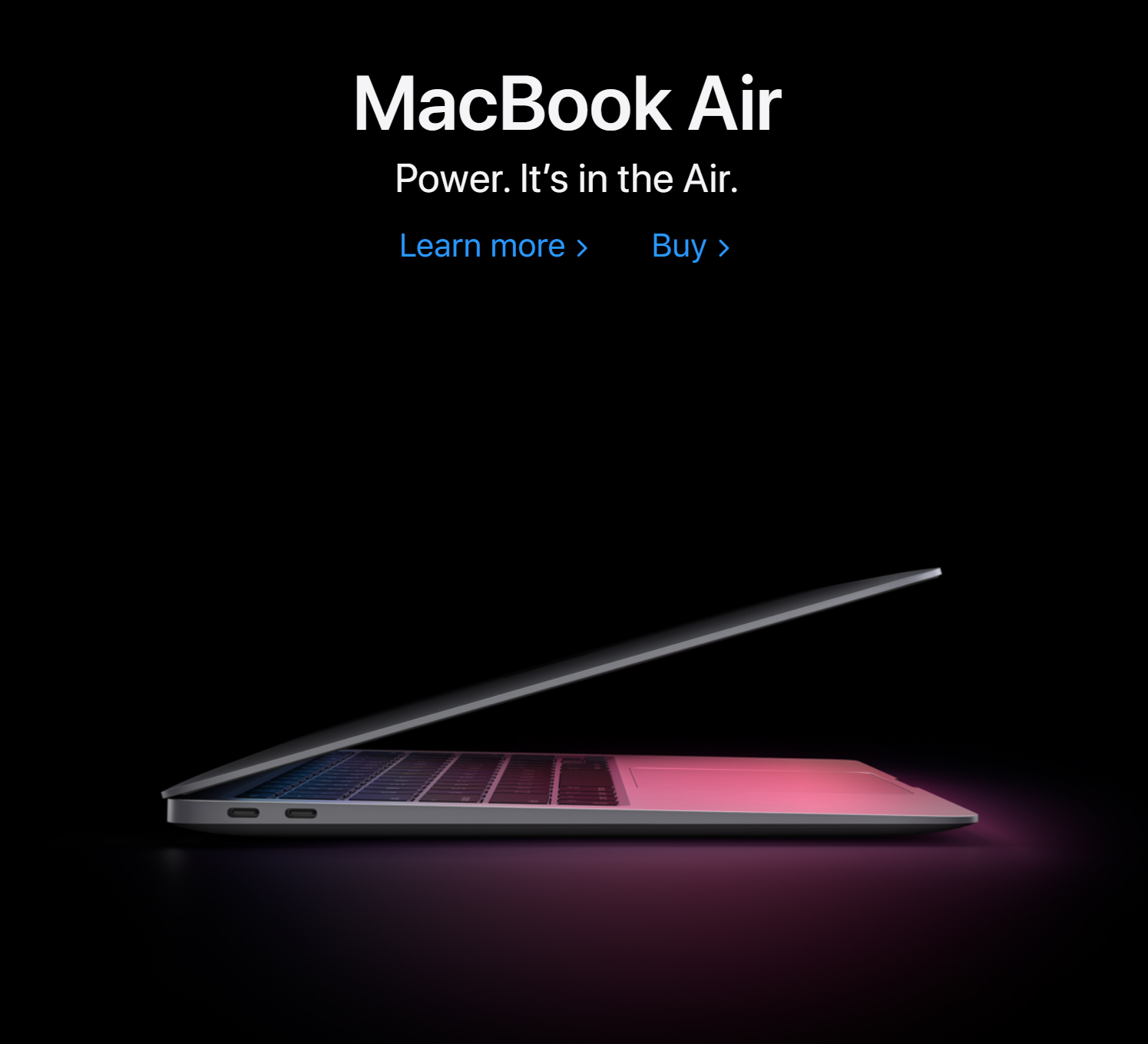 “It’s in the air” sat above a half elevated computer screen; the message couldn’t be any clearer.

From that iconic brand mark to those carefully considered font choices, Apple’s visual language is always as clean and unfussy as their copy. Both sides of the creative are following the same principles - that’s why it feels effortless.

But just as designers and copywriters look to create distinctiveness in terms of visual identity and tone, the modern marketer is doing just the same with their campaigns.

There’s no safety in numbers in the creative space

In his book The Choice Factory, Richard Shotton discusses the importance of distinction in campaigns. In particular, he references how Comparethemarket successfully subverted the norm in their space.

In 2008, GoCompare, Moneysupermarket and Confused were all plugging the functional benefits of insurance, e.g. how much they saved the average consumer. Looking to stand out from the crowd, Comparethemarket decided to take a very different approach: they created Aleksandr Orlov, owner of Comparethemeerkat.

The results were astounding.

“It rose from fourth ranked site to first in terms of consideration and spontaneous awareness. Quote volumes went up by 83% and the company achieved its 12-month objectives in 9 weeks,” said Shotton.

And although brands have used comedic animal characters in their adverts for years - our favourite is this hairy Phil Collins impersonator - never in this space. It’s no wonder then that GoCompare followed suit the following year with this guy. They had to carve their own niche in the market to have any chance of cutting through.

But contrary to popular belief, it’s not just B2C companies that are feeling inspired. In fact, a growing number of B2B organisations have been thinking outside of the box too.

Quickbooks’ campaign with Danny Devito, ‘Backing You’, saw the accounting software company partner with GIPHY to create a searchable library of GIFs for small businesses.

With over 500 million views since it started in January 2019, the campaign was a huge success. It’s unsurprising then that Sage, their key competitor, has since tried to carve their own niche with 2020’s ‘Boss It’ campaign

But the creative minds at Shutterstock proved that you don't need celebrity endorsement to go viral.

In 2019, they parodied the much-maligned Fyre Festival to great effect and demonstrated just how much you can achieve with a limited budget.

Costing under £1,600 and consisting entirely of their own stock footage, ‘Overhyped festival video’ had over two million hits in its first week and won Best Limited Budget Campaign in The Drum’s 2019 B2B Awards. Not only that, it helped flip the perception that using stock is somehow uncreative.

“We thought it would be a great way to show marketers and creative teams that you can truly create anything you want from our 12 million video clips and tens of thousands of music tracks.”

But how do you get to that one great idea that sets you apart from the rest?

Creativity. It’s what ties the modern marketer and designer together more than anything else.

If “design thinking” is about taking the time to investigate a problem before coming up with a solution, any strategy planner will tell you that’s exactly what they do when building a brand proposition. Otherwise, who’s it actually for apart from themselves?

But you can’t automate a good idea - it takes creativity.

That’s why the modern marketer is really a designer. Whatever the job title; be it copywriter or inbound marketer; and whatever the product, it’s creativity that’ll produce something of enduring value in the end.

In ‘The Devaluation of Creativity’ from Eat Your Greens, Bob Hoffman said:

Designers know that the media is not as important as the message. They’re tasked with creating something inclusive that works for everyone. In their eyes, no one group should be left out in the cold because of their technical ability, age or circumstances.

And good advertising - the stuff that resonates - does the same. Because believe it or not: not everyone uses TikTok or Instagram. In fact, more and more people have taken the plunge and quit social in the past year.

The latest platform will always go out of fashion eventually - it’s inevitable. But creativity’s one tool you can’t afford to lose. By thinking like a designer, the modern marketer can rest assured: they’ll always have that one in their back pocket. Creativity will always be trending.