Why so serious? Why humour in marketing can mean BIG business 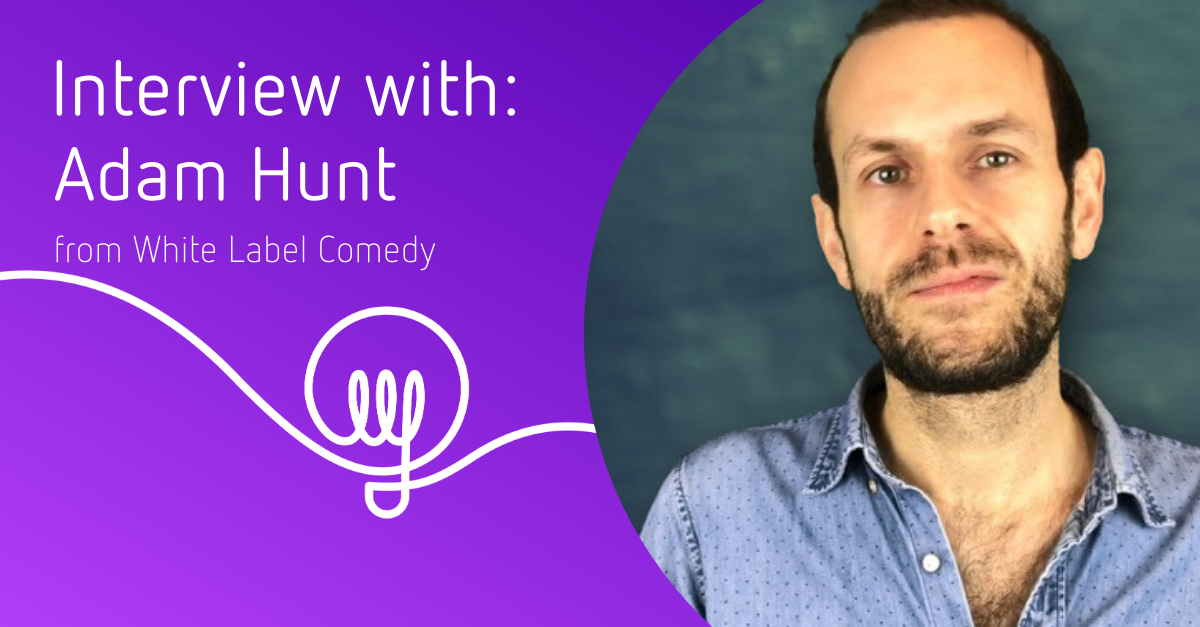 Adam Hunt from White Label Comedy is a man on a mission. To take boring marketing spiel, throw it in the bin and bring genuine personality to brands.

This approach is something that resonated really strongly with us in the Bright marketing team and so we were sold. There were of course doubters - How would he make Digital Asset Management funny? Would it be a slapstick nightmare or a thigh-slapping success? We share more about this process in the podcast but for now, delve into the mind of the man who took on the role of 'Big Brother' and find out why he left his job as Producer of The One Show to be a full-time funny guy.

Adam, in a past life you used to be a TV Producer - can you tell us a little about what that was like? Did you mainly work on comedy shows?

I’ve been at the helm of the UK’s most-watched chat show, helped to produce award-winning panel shows and comedy entertainment formats. 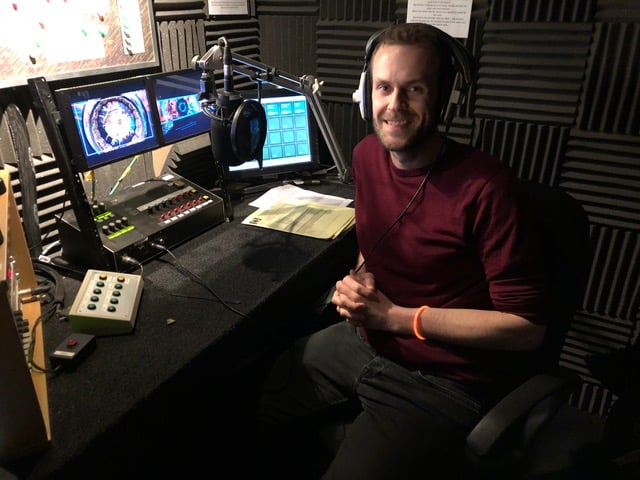 Adam in his role as 'Big Brother'

I was even Big Brother on the last ever UK series of Big Brother - although if you’d seen behind the scenes, you’d realise that’s way less impressive than it sounds. Actually, though - the show that made me who I am today was The One Show. As a Producer you’re given a blank slate, and you’re allowed to fill that blank slate with ANYTHING you want - so long as you can justify it, prove it makes sense, and convince the top dogs it’s the way to go. 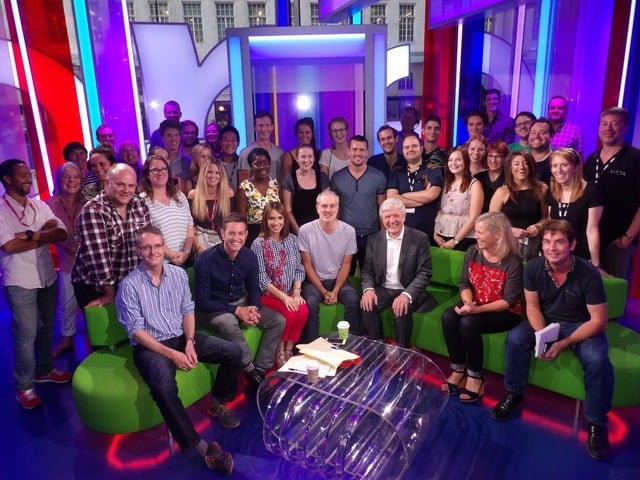 Back in the days of producing The One Show

It’s a show with an awful reputation but that’s generally only when you’ve got a Producer who phones it in. For me, it was where I learnt that you can get away with anything - literally anything - if you can find a way to make it “make sense” editorially. I’m sure a lot of that fed into my determination to find a way to make brands funny - even the brands who wouldn’t have ever thought it was something that could be done.

Studies have shown that as young people we laugh a lot, then when we reach our mid-twenties, this figure considerably drops (Source: ‘Humour, Seriously’ Book via the Daily Mail) This seems really sad - why do you think we’ve stopped laughing so much?

I think those studies are surveying the wrong people! All of my favourite people never stop laughing - even when they take things seriously.

I do think we can get bogged down in the demands life places on us - it all gets a bit more serious, and a lot less fun - but without wanting to sound like some kind of new age hippie, that world is one you chose to build around yourself. You can choose to build a different world, too.

A couple of years back I think i’d stopped laughing so much. I was making TV shows that most people would kill for a job on. Even I’d have killed for a job on, once upon a time - but I wasn’t enjoying the world i’d built for myself. So I started building a new one - and now I’m back to loving life, and laughing (even outside of work) is much more of a thing.

Tom Fishburne (The Marketoonist) said in a recent talk at Festival of Marketing, that when hard times hit, most brands turn to conventional ‘samey’ messaging - taking the stance ‘it’s better too serious than sorry’ - rather than standing out and daring to reach out to people using humour. I definitely feel that advertisers are being plain lazy at the moment - Banks & building societies, supermarkets etc. Do you think that’s the case?

Yes - and if I see any more “us on Zoom together” Ads I’ll shoot myself. Now we’re back in Lockdown I fully expect a resurgence of those - with even less thought put into them than last time.

Brands are notoriously cautious - and humour (or even, to be honest, just being human) is notoriously risky. Thing is - there’s a way to make jokes that has zero risk of backfiring. The brands that get into trouble for their sense of humour generally began their process by asking “what’s funny?” rather than tasking “what do we want to tell our audience? Ok - what’s a funny way to express that, that they’ll - specifically - enjoy?”

A GSOH crafted the right way is almost entirely risk-free.

The British are known for their slightly more cynical or macabre sense of humour - do you find that this translates into the writing you do at White Label Comedy when working for British clients? And would you change the style of humour for say, an American client?

The biggest difference between a broad American audience vs a broad UK audience is that the British get much more of a kick out of subtly. If you were a stand-up telling a joke to a room who’s paid to see you - in the UK you can give them jokes it takes a second to get. In the US, you need to telegraph the joke a little more. Make it super clear there is a joke. That definitely translates to social, too.

We don’t often deal in broad audiences though - all of our clients operate in very different niches - so much more relevant than the US / UK divide is the question of what does this specific audience, wherever they’re based, believe? What do they want to hear? What’s the message the brand wants to get across? There’s actually not often much space for cynical / macabre humour anyway once you start breaking down the question in that way. If you asked 100 brands “if you were a stand-up, who would you be?” I don’t know that any of them would say Ricky Gervais, or Frankie Boyle.

There can be a sense of fear around using humour in businesses - especially in a B2B environment. How can brands move away from this and be brave enough to dip their toe in?

Here’s an excerpt from our sales page that deals with this very topic:

YES - BUT ONLY IF YOU DON'T KNOW WHAT YOU'RE DOING

The worst mistake any brand can make is to simply start trying to “be funny” on social – those who do can quickly find themselves cancelled quicker than J.K. Rowling can tap out an open letter.

COMEDY 101: EVERY JOKE HAS TWO HALVES

IF YOU GET BOTH INGREDIENTS FROM A SAFE SOURCE, YOU'LL WRITE A SAFE JOKE

Break down any joke – and assuming it actually made you laugh, here’s what it is:

Two “things” (ideas / concepts / words / phrases) that shouldn’t fit together, but that have been made to fit together, with the help of a perfectly placed surprise twist.

That’s literally all a joke is.

If you make sure both of those “things” are drawn from the world of your brand, and the relatable experiences universal across your audience, it’s hard to go wrong.

Add in an extra sense-check phase that double checks that any opinions expressed by a joke are ones that your audience agree with – and you’re more likely to offend by re-posting that same boring blog for the 18th time than you are by tweeting a fresh, funny, brand-relevant joke.

THAT'S WHY WE USE…

We needed a system for audience research that arms our writers with the ingredients they need to write the right kind of jokes, and helps make sure they’re not distracted by the lure of the wrong ones.

That’s why we developed the BSOH (Brand Sense of Humour) Breakdown Matrix.

An insight into the BSOH Matrix...

It’s the way we break down everything there is to know about a brand, their products, features and benefits, the audience, their problems, the brand’s solutions, related topics, the audience’s universal beliefs, relatable truths and pop culture interests – so we’ve got easy access to all the knowledge we need to get on with the fun part: writing jokes that entertain, engage and sell.

So let's talk specifics - Do you have any examples of companies that you feel always get the tone of their humour just right in their marketing campaigns?

I don’t know if there’s anyone who ALWAYS nails it. In terms of social, I’m always in awe of Innocent Smoothies - just because they know exactly what their audience wants. At the start of lockdown, they tweeted every day with a daily reminder of what day it is today - and it went viral, every single day because they managed to hit the nail on the head.

McDonald’s recent McRib tweets were a GREAT example of how comedy can be used as part of a strategy. First up a funny tweet that broke the fourth wall, and hinted (while pretending it wasn’t hinting) about a product re-launch. That sent fans into overdrive. Then a week later - a tweet from the same “guy” confirming the McRib is back. Those two tweets between them probably got 1000x the attention that a tweet just saying “The McRib’s coming back” would have. Comedy as strategy. 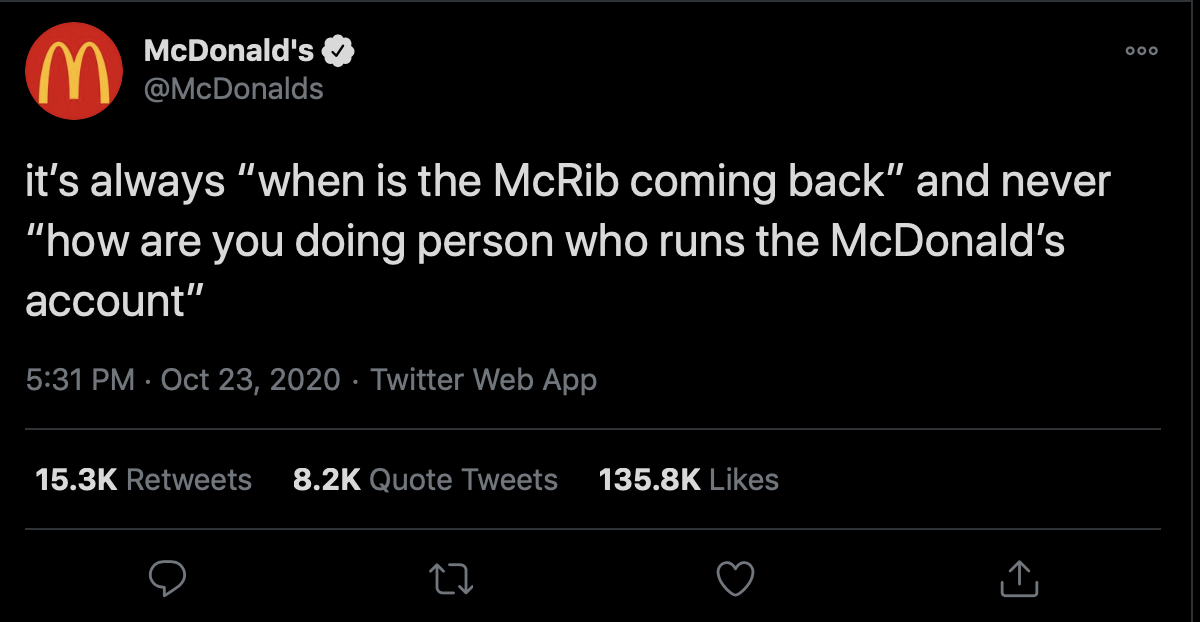 If a campaign or piece of bad press has hit the wrong note with an audience, do you think it’s appropriate for a company to react with humour on social media?

Maybe. Self deprecating humour works well - but it needs to come across as genuine, or you can inflame the situation more. There’s always a great way to use humour and apologise - but if you don’t have a hive-mind of comedy writers, copywriters and marketers in your back pocket I think sometimes it’s best just to go with a genuine, heartfelt apology. Or give us a call.

Finally, are there any types of humour or subjects that you’d warn companies against using online?

(So don’t make jokes about the Tories - no matter how much you hate them - unless you’re the Labour Party, in which case those are exactly the jokes you need to be making).

It all starts with audience research. Find out what your audience wants from you - and give that to them with a sense of humour layered on top. Do it like that, and you can’t go too far wrong.

Our podcasts are recorded and produced by Let's Talk Video Production.