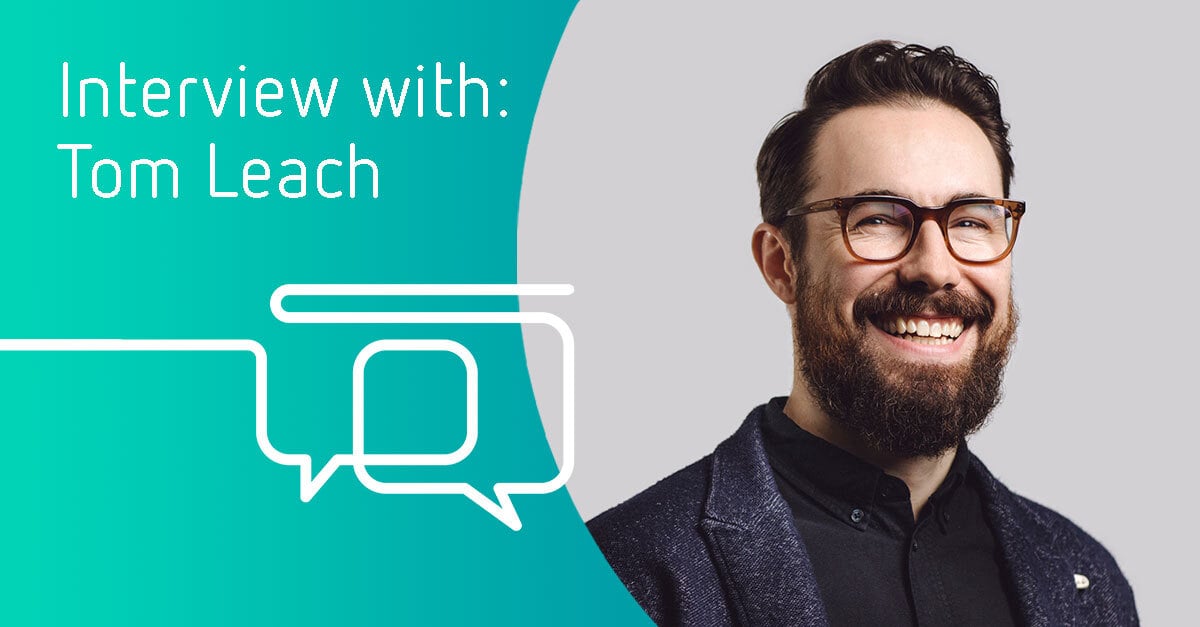 We've worked with many creatives over the years, and one who really stands out is Tom Leach, creative director and founder of Evoke, a creative agency based in Brighton. Tom has over 16 years experience in some of London’s leading brand agencies including The Partners (now Superunion) and Imagination and has worked with some of the biggest brands on the planet. We worked closely with Tom to evolve our existing brand into one that authentically represents our personality and culture. Somewhat of a creative onion, we invited him onto the podcast to peel back some layers and discover his creative secrets…

Tom, could you please tell us a little bit about how you came to be the Director of your own creative agency?

I worked in London for over 16 years, and I feel pretty proud that I spent that time in great design agencies, working with a lot of super people on some lovely projects with businesses of all shapes and sizes. So it's been really exciting for me, I feel quite privileged to do what I love. I started out by doing an Art Foundation course, which is quite a common thing to do before you go into university to study anything creative. I did that to help guide myself really, because you get to explore all different types of media design.

I didn't study graphic design at uni, I actually did packaging design as a degree. What I loved about that was actually learning about the brands behind the products and the packaging - more so than the packaging itself, because that changed quite a lot. And the brands felt more important, they always had a mission and values behind them and a bit of ambition. So I thought, that's really what I want to get into.

Can you tell us about any of the brands that stood out for you when you were developing their packaging?

We had various briefs set at university that were self-initiated - so you’d often come up with your own brand. One that I came up with was the idea of a car-sharing brand that took the pressure off the commute for Londoners and the like. It also made use of locations such as old buildings that were abandoned. I created these local carpools where you'd rock up early in the morning to grab a car if you needed to commute somewhere, or swap your car and use their electric vehicles. They'd also give you breakfast and lunch as part of the package!

That's really what I do with brands, help with their challenges to enable them to become stronger and better. So it all sort of started there, just looking at ‘what's the challenge’, ‘what's the issue behind where people want to go’ and I love that. 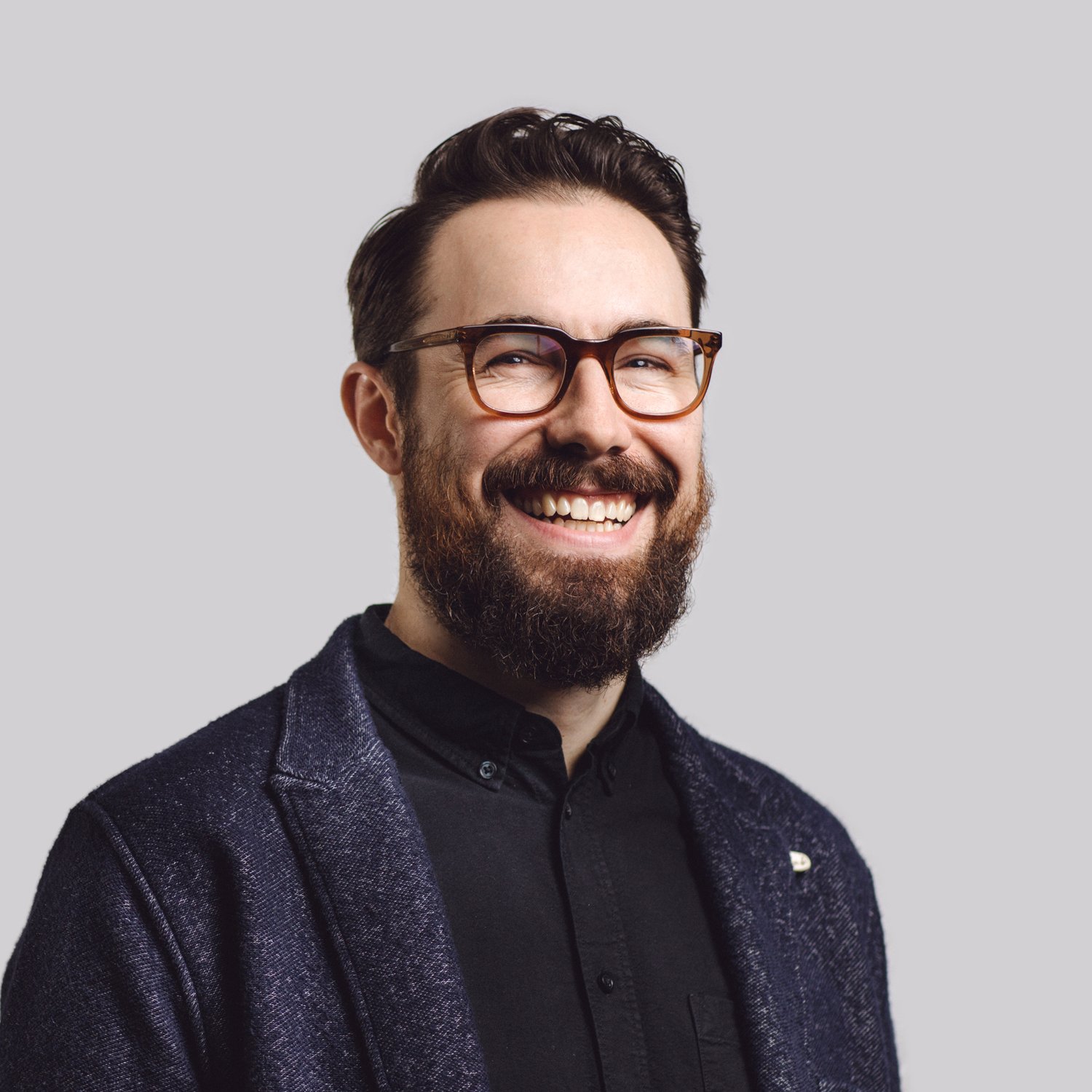 That segues us nicely into the rebranding of Bright. You worked closely with Vic and the team to take them to the next level of their brand journey. How do you approach a project like that when it's already begun - maybe it's got some of the bare bones, but they just want to take it further?

The first step is to meet with the client and talk about their business and their challenges - setting aside a nice bit of time for that as every project is different. They might like to start with a brief right out in front of them or perhaps you help them to develop one.Through that discussion you start building a relationship and trust; volunteer directions, opportunities of where things could go and recommendations. Along the way you challenge and question but in the ambition of discovering things that could be added or hidden or could be elevated or moved around. This is important because quite often people don't quite know what they want or they just want somebody who's experienced and can guide them. 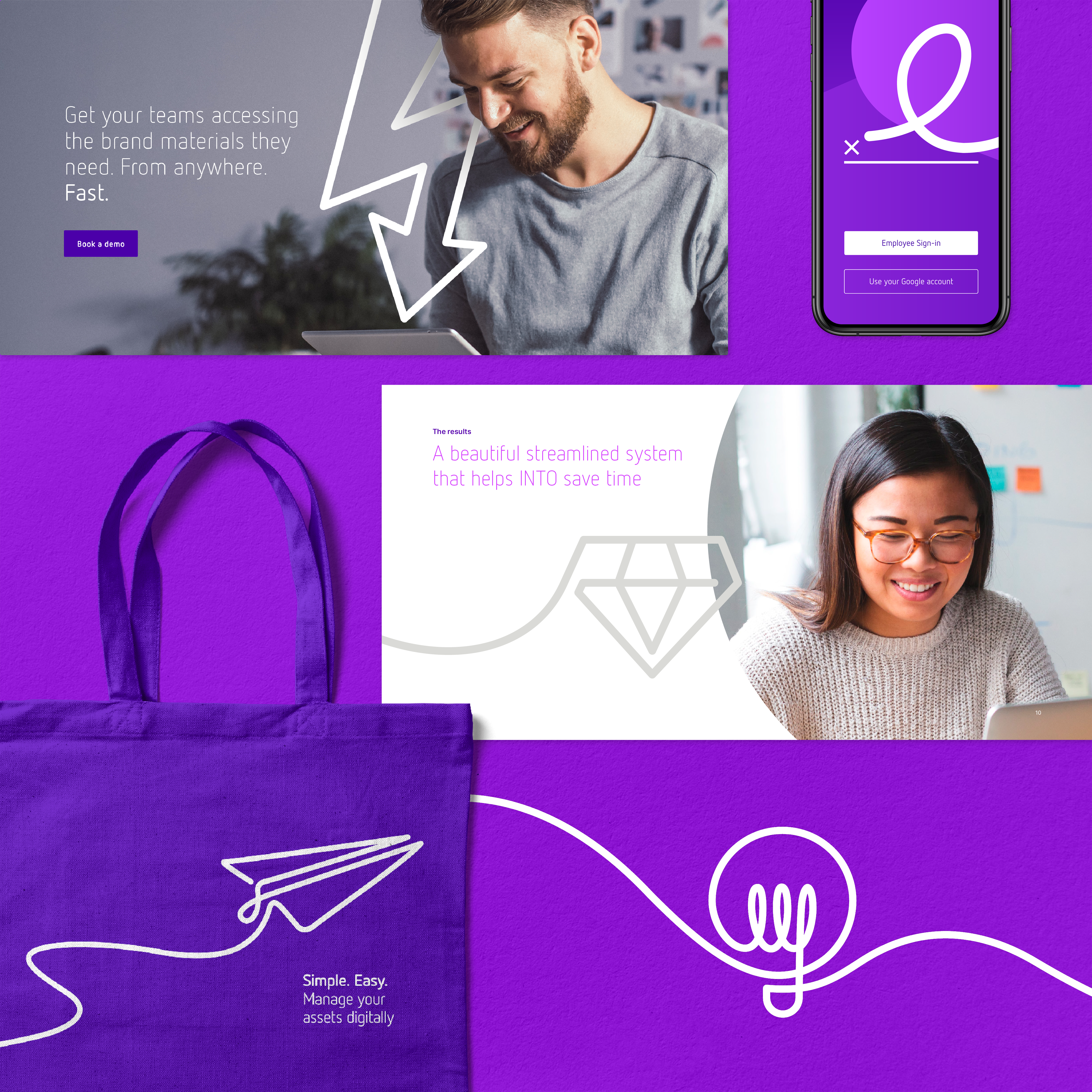 Rebrand for Bright by Evoke

Can you give any tips for briefing a designer, what to avoid doing and how to make sure that you're both on the same page right from the beginning?

I think the most important thing, above all, is just to simply be clear. If we're talking about a written brief, then I think the key here is to challenge yourself to be concise because that demonstrates how well you understand your own project. A good way to test that out is to try and fit that whole brief onto one page - if you can do that, and it feels good, then then you're on the right track. If it doesn't feel 100% clear, then it's always best to go back and work out why that is, is it your knowledge of it, or is it that someone handed it down to you and didn’t explain it?

That's interesting because a lot of people would be tempted to pack a brief with detail. So what should be on that one page? Say you were approaching a rebrand, what would you need?

If it's a rebrand, there will be a lot more questions and answers beyond the page of the brief. Let's make the assumption that the person reading this brief doesn't really know much about the background. They’d need a very quick intro into who the company is, what their challenge is, and things like, what's the deadline? Who are they talking to? Who’s the audience? Is it internal or external? This will then give the designer an idea of how to shape their initial ideas for the project.

Have you had many instances where you feel like you’ve got quite far down the line with a project and your client has strayed from the brief? How would you manage this?

I think a good brief is something that you can always return to and measure against the objectives that were set out. An example is when you are sharing your first round of creative, and demonstrating how you're solving their challenges and measuring those ideas. If there’s any discussion that that feels like it may get out of control or it needs measuring, then I think that’s when you go back to the brief, and it helps keep people on track a little bit. What’s also important is to share the brief with everyone who is going to have a point of view on the creative. So stakeholders, in other words, and it's good to tell the designer or studio or agency who those stakeholders are because everyone needs to be on the same page.

Is there a specific project that you've worked on that you felt really pushed your creative boundaries?

I worked on a brand campaign for Vodafone where I led the creative team and the end result was going to appear on London taxes. It was the biggest campaign of its kind in the UK. The idea that I came up with involved a typographic map of London that covered the entire taxi. 2000 street names had to be typeset in a particular typeface and all from scratch as well. I didn't have a purchased map that I could quickly just stick on there - we were rearranging things to suit the design that myself and the team had in our head, whilst making sure everything was geographically correct. Campaign created while at The Partners (now Superunion)

There was always the fear that someone would pick you up on something that was incorrect. I'm glad that it went well because this thing was on about 1000 taxis for a year! So if there were any spelling mistakes that would have been pretty haunting.
One of the cabs was used in a TV ad for Vodafone, and it featured Yoda in the backseat. He was using the phone chargers that were part of the idea and were installed in the cab to charge his lightsaber. Yeah, couldn't have been more proud at that point.

Absolutely. What's nice is that you can also stay in touch with your clients via Instagram. There's so many talented people out there, whether they're animators, illustrators, clothing designers or interior designers - I love all aspects of design! And sometimes it's just as inspiring to see a fantastic new interior space as it might be to see a great new brand for something that's really disruptive. And so it always sort of feels like good brain food.

There’s been a general feeling that it’s been difficult to keep creative this year because we haven’t been able to go out or travel so much. How has that affected you? Have you felt more or less creative?

Well, the big difference for me has been not being able to meet clients face to face. It's just different. We've all quickly adapted and I think everyone's done a super job jumping on to all the long list of video conference programs! With all things, it’s good to have a nice bit of variety and popping into an office is great -the little walk to and from and just seeing your client, it's all a lovely thing. And you can gain a lot from that. So I think that's a challenge - you've got a bit of distance there. I think in terms of creativity, you're still working on the same brief, and same projects - perhaps the channels change to suit the time, but you've always got the brief and your client there to help push creativity as well.

You’ve got to find a way to be your own creative director and give yourself a bit of perspective - stepping back from what you're doing for a moment just to see the big picture. It's very easy to be really hard on yourself when you're in isolation. And actually what you're doing is probably pretty good! Giving yourself some space to solve a problem is key, it can be as simple as just going away from the computer or whatever you're doing to brainstorm or just go for a walk or have a cup of tea. 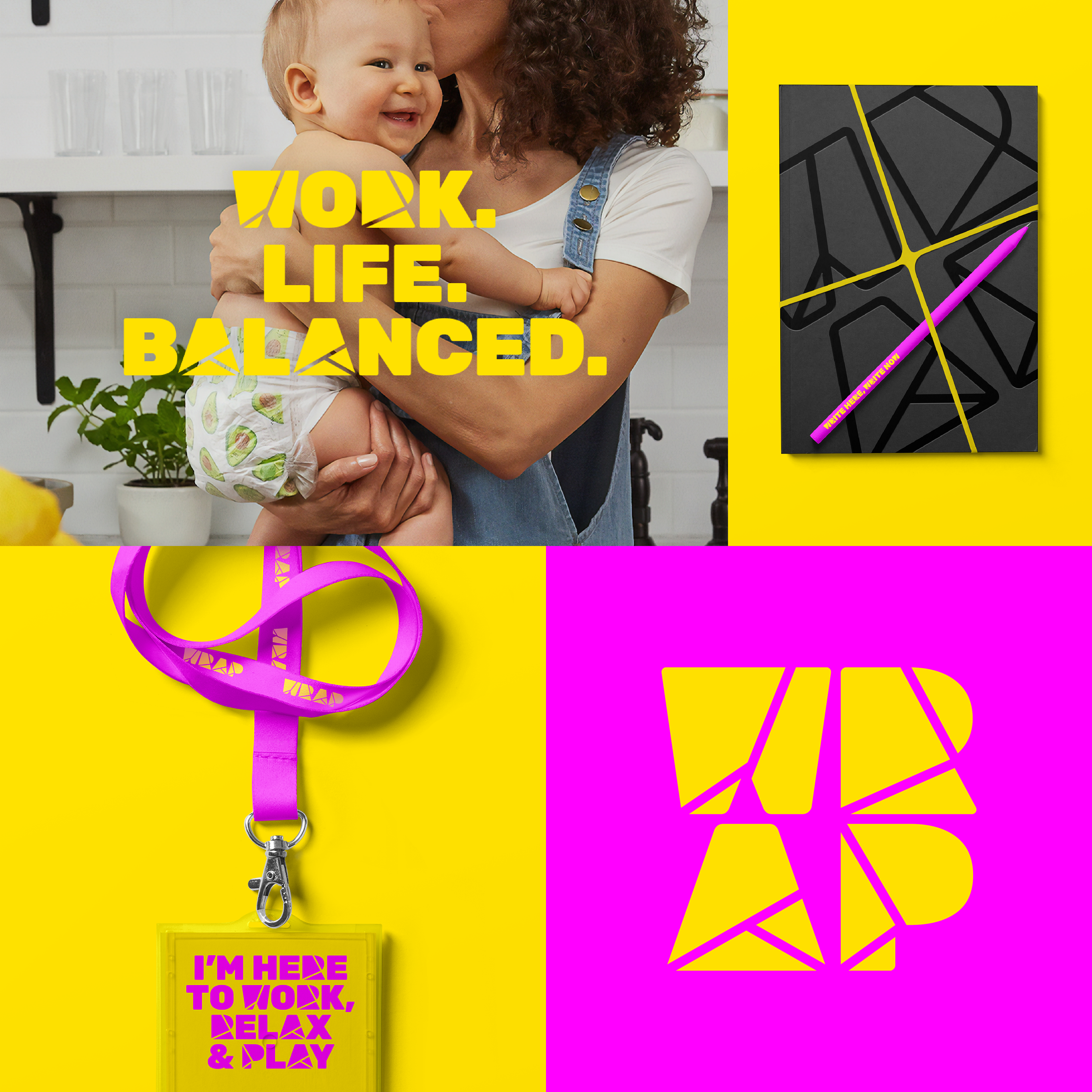 Brand identity for WRAP by Evoke

Having a cup of tea is the most British solution to anything, isn't it?

Yes, my creativity is boosted by having a cup of tea, sometimes 10 in a row is quite useful as well - definitely gets the brain working a little! It really helps to step away though as sometimes the danger is that you find yourself in a hard situation, the pressure builds up and you push even harder. It’s easy to put pressure on yourself if you’ve only got a set amount of time, say an hour to solve the problem. But if you just take five minutes of that hour to relax, reset and think things through it's going to be worth it. Because if you spend another hour going in the wrong direction, you're in trouble.

That's a good message to finish on really because with anything - especially creativity is it doesn't always work to plan and it doesn't work under pressure. So taking a bit of time out, especially at the moment when there is so much pressure can really be the key to getting things right.

A big thank you to Tom for joining us on our podcast! We hope it’s helped both creatives and non-creatives food for thought and perhaps helped if you’re thinking about creating a creative brief in the near future. You can read more about Tom on his website, or check him out on Instagram on @studio_evoke.

Our podcasts are recorded and produced by Let's Talk Video Production.