The best browser for Asset Bank? 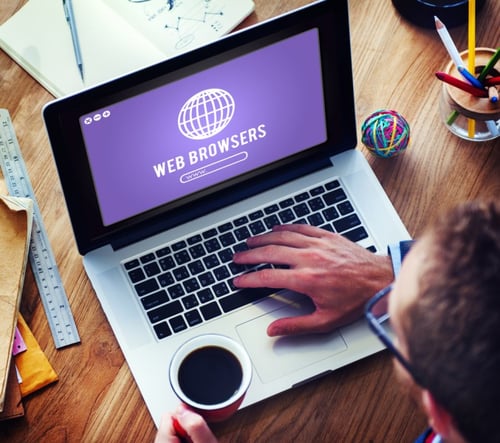 One of the most powerful features of a web-based DAM like Asset Bank is that it can be accessed by anyone, anywhere in the world, simply by typing a URL into a web browser. Most of us don’t give a second thought to which browser we are using to do this, it’s just a case of using 'the one we always use’, which is often 'the one that came with the computer'. However, some browsers can actually give a better experience than others, so it may be worth taking a moment to consider whether you should be switching to something better. At the time of writing (2016/06/24), Asset Bank comes with support for:

That’s a fair few to choose from, so let’s take a look at some data to help us figure out which one is best.

Which is the most capable?

Given that modern browsers have a broadly comparable set of features (tabbed browsing, bookmarks, integrated search, and remembered passwords are a given these days), I’m going to be focusing on capabilities under the bonnet.

Web applications like Asset Bank are delivered to your browser in the form of HTML, CSS and JavaScript. These 3 technologies are continuously evolving as new features are added to enable ever richer user experiences, and it’s the browser vendor’s job to do the work of implementing them.

To take an example, 'Service Worker' is an exciting new web API that essentially acts as a proxy server between your browser and the network. OK, it sounds a bit dry, but what it means is that developers can use this API to make their website load much faster and even continue working (to some extent) when you are offline. That’s an impressive new capability that some web apps have already started making use of, but to get the benefit you have to be using a browser that has implemented support for it (currently limited to Firefox, Opera and Chrome).

So, picking a browser that is working hard to implement emerging web technologies like Service Worker, means you are in a position to take advantage of features under the bonnet designed to improve your experience.

To figure out which browser is top dog in this regard, I've done some analysis using online tools for calculating browser capabilities to get the percentage of features in the latest version of all 3 technologies that each browser supports:

Figure 1 - Percentage of new technologies supported by each browser

Looking at the data, overall, the most capable browser is Google Chrome, closely followed by Firefox.

Is it future proof?

We’ve established that browsers need to be constantly improving to keep up with evolving web technologies. But how do these improvements get to your computer or device?

Fortunately, most modern browsers have got this covered by being self-updating. They automatically download and install new versions as soon as they are released, often without you noticing. Having this ability means that as long as the browser vendor is continuing to develop their product you will automatically be kept up-to-date.

Not all browsers do this though, and out of those that do, some are better than others. Figure 2 gives the details:

So Microsoft Edge, Google Chrome and Firefox are the best options for keeping up-to-date, with pain-free self-installed updates at a nice and regular rate.

What’s everyone else using?

Every once in a while I like to have a look through the data from our server logs to find out what browsers people are using to access Asset Bank. It’s a picture that keeps changing over time, and as of May 2016, the picture looks something like this: 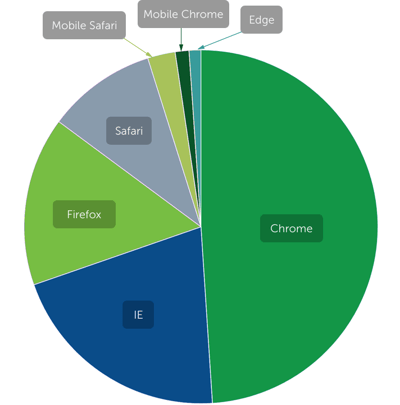 We use this data to help focus our testing efforts and periodically review which browsers we are choosing to support, so picking the most popular browser is a pretty safe bet.

As you can see, in this instance the most popular browser by some distance is Google Chrome.

As an aside, this data also shows the dominance of desktop browsers with only a small slice of mobile visitors. This isn’t too surprising given that a Digital Asset Management system is primarily used by people at work, sitting at desks. The number of mobile visitors has been slowly growing though and we expect it to continue doing so.

We need to talk about Internet Explorer

Internet Explorer, or IE as it is often shortened to, gets a pretty bad rap in web development circles. Thanks to its myriad of bugs and a glacial pace of adopting modern web technologies, the prospect of making a web application work well in an old version of IE holds very little appeal for your average web developer.

Despite these shortcomings it has historically always been very widely used, helped along by its enviable position as the browser that comes already installed on your computer. Figure 3 shows that it still has a respectable chunk of market share, and just a few years ago it would have been the biggest wedge on the chart. It is, however, a slowly dying empire. Microsoft themselves recently announced that it's only going to continue providing support for the latest version, IE11. They've also launched a more modern browser, ‘Edge', which does seem to be embracing new web technologies, and replaces IE as the default installed browser in Windows 10.

Here at Asset Bank we recently took the decision to drop support for IE8. The browser stats illustrated in figure 3 told us that usage had dropped to below 0.5%, and what with Microsoft giving it the chop, the time seemed right to do the same. The good news is that the effort we used to spend testing and fixing issues in IE8 can now be diverted to improving and developing new features.

We’ll continue to support IE9 for now, but hopefully usage of that will also dwindle so we can concentrate fully on the modern, more capable, self-updating browsers.

It looks like Google are doing things right, with Chrome being the most popular, most capable and one of the best at keeping itself up-to-date. If you are looking to switch then Chrome represents a wise choice. Firefox also did well, with a strong showing in all 3 areas. Safari is noticeable for its disappointing support for the latest web technologies as well a release schedule that looks increasingly old-fashioned in today's world of continuously updating software.

It’s difficult to see any benefits in sticking with Internet Explorer, especially given the lack of security updates for all but the latest version. If you are still on it, now is definitely the time to jump ship. If you are a die-hard Microsoft fan (if such a thing exists), then your best bet is the new Edge browser. Considering how young it is, it has achieved respectable support for new technologies and boasts the most rapid rate of new releases.