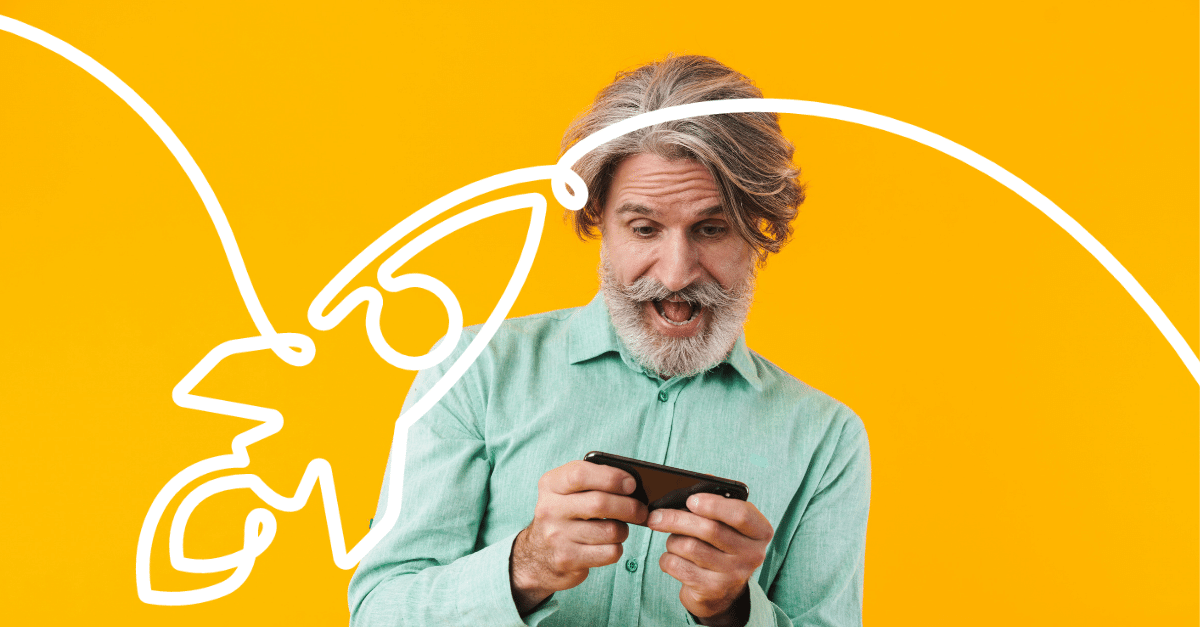 You guessed it, viral is a five-letter word.

But with over 3 million players worldwide, how’s such a simple game gotten so huge?

Well, according to Wordle’s creator Josh Wardle (see what he did there?), it’s partly down to the game’s unconventional share functionality; one that works counterintuitively to social’s tried-and-tested rules of spreading the word. Because if this was an effort to entice as many new players as possible, Wordle would include a link at the end of the tweet it generates.

Instead, players can share a simple unbranded grid of results. If they decide to post their scores on socials at all, that is.

“...although it gets seen a lot on Twitter, most people, I think, aren’t sharing their results on Twitter. They’re sharing them with friends and family in group chats and things like that,” Wardle told Nicole Holiday in an interview for Slate.

Essentially, it doesn’t matter how disconnected you are from family or friends, the fact that everyone’s guessing the same word makes it an easy excuse to touch base.

Unlike more cynical attempts from advertisers to go viral, this game’s about creating and maintaining personal connections. And in a time when holding on to those feels more precious than ever, maybe that’s why Wordle’s caught on

But perhaps there’s something else at play here.

It’s no secret that social media and other apps are gamified to hold our gaze for as long as possible. Wordle, on the other hand, opts for something refreshingly different.

“Wordle’s popularity is thought to be partly because, in an era of apps aggressively competing for your attention and time, the game was deliberately built to be played once a day, and without features designed to promote its growth such as push notifications and email sign ups,” says Rachel Hall in an article for The Guardian.

Playing the game once a day makes Wordle feel like an event and gives it a sense of distinction from the rest of the pack. Not only that, it harks back to a time when a game was just a game; not another opportunity to be advertised to.

But advertising’s not going away.

In fact, as technology continues to advance, it’s likely to creep into more and more aspects of lives - whether that’s our actual realities or augmented ones. So, is it asking too much for advertising to be as fun as it is intrusive?

Spelling it out: what marketers can learn from Wordle

Matthew Pierce, Founder and CEO of immersive advertising specialists Versus Systems, argues that gamification can work in marketing. But only if advertisers aren’t so pushy:

“It’s not being forced to watch an ad, but being able to choose what you want to play for. That literally opens up different pathways in your brain, and you stop thinking about it as an ad. You see it as a reward, as a prize. You see that it’s something you earned, and that's materially different,” he said in an interview with Forbes.

And some brands are already experimenting with digital artefacts as prizes; we already know that NFTs tap into the human desire to collect - especially if that item’s scarce. Not to mention the advertising possibilities inside the metaverse. Because if Mark Zuckerberg’s forecasts come true, there’ll be a billion digital avatars socialising, shopping and gaming inside of it by 2031. So if this platform proves as successful in terms of advertising as his day job – Facebook ad spend reportedly reached $25.56 billion in 2019 – it could be the new frontier for gamified ads.

But much like Wordle - a game with pure-hearted origins - works because it creates personal connections, the best advertisements do more than just push the “hard sell”. In the metaverse, our digital avatars will still be human at their core and, consequently, no less wary of being advertised to.

“Brands need to strategize how to be present in the metaverse,” says HotPlay’s Chief Commercial Officer, Pimsai Chichareon. This could be in the “...form of standalone advertisements, sponsored in-game quests” and incentives such as “in-game tokens, NFT items or real-world coupons,” she says.

However, brands don’t need to wait for the metaverse to gamify their marketing; it’s already happening.

Take Fortnite and its colossal community of over 350 million players for example. In this immersive world, you’ll find no digital ads to shatter the illusion or break your concentration. Instead, players can interact with ads through meaningful mini-games; this could be going on a quest to collect the Infinity Stones from Avengers Endgame, redeeming an exclusive pair of digital Nike Jordans or playing as John Wick with his very own signature collection of weapons.

The problem is, it might still be a bit too state of the art for most brands. Because although this style of gamified marketing has proved immensely popular, it isn’t cheap. At this time, creating an in-game branded object for players, e.g. virtual skins or interactive items, costs brands around $500,000 per week. (Oh, and if you'd like to find out more about gamification, check out The BIG Bright Podcast where we talk to gamification expert, Pete Jenkins.)

More back-to-the-drawing-board than Back to the Future for your average brand then. Especially if this form of marketing isn’t even attracting new customers.

“At this price point, these branded promotions aren’t necessarily about reaching new audiences. Instead, it’s about using the game as a platform to reward your real-life community (who are also Fortnite gamers) with a unique and memorable experience, which can then be amplified through traditional channels,” argues Jaimie Lee at AdRoll.

Still, there are more cost-effective and cerebral ways that brand campaigns can catch on with games. How?

It’s all about the mystery. 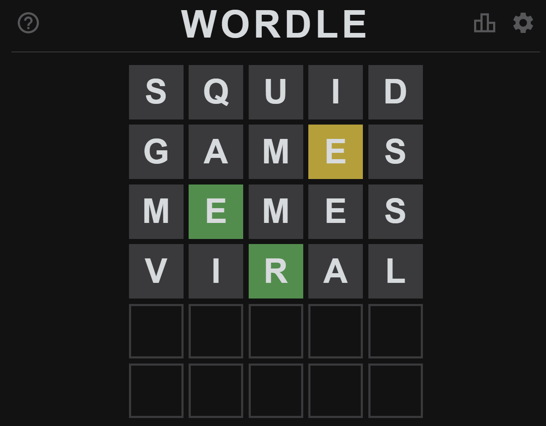 Much like Worldle’s green and yellow squares were popping up in our WhatsApp chats and Twitter feeds long before many of us had even played the game, there was another set of shapes dominating our collective consciousness in the months before.

Squid Game - a modern tale of mysterious marketing (and memes)

According to Netflix’s public popularity charts in November 2021, Squid Game was the most popular show the company has ever released. In fact, it racked up a staggering 1.65 billion hours viewed in its first 28 days.

But much like Wordle’s simple and intriguing iconography, the makers of Squid Game deployed a similar trick.

If so, didn't it feel oddly familiar?

“The shapes are simple, even unoriginal, as they are the ultimate “gaming shapes” PlayStation turned into gamer icons. Yet, the way the show uses and incorporates them gives them a new life of their own,” says Barbora Jassova in ‘7 Lessons Squid Game Taught us about Demand Generation’ for Landbot.

With almost 30 years of brand prominence - the first Sony console was released back in 1994 - these shapes have become synonymous with gaming. But unlike PlayStation; a brand that splurges on costly campaigns for its shapes to go viral, Squid Game’s viral marketing was powered by social media’s obsession with memes.

Of course, it wasn’t long before brands latched on - to varying results. 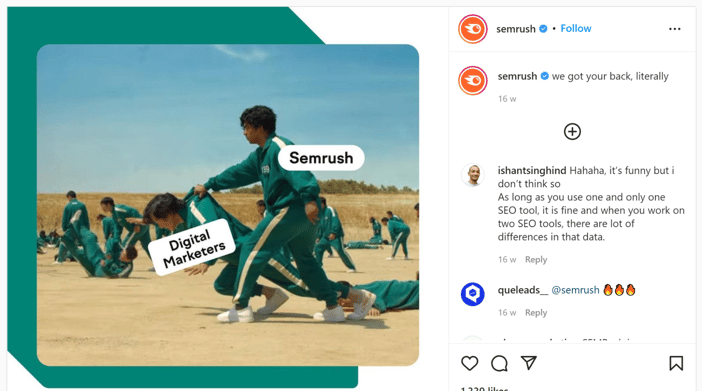 In ‘Biting the hand that feeds us’ from Eat Your Greens, Kate Waters believes that chasing novelty and virality is doing some brands a disservice. She argues that “...being distinctive is about reinforcing memory structure in the brain and associating them with brand assets.”

The problem is that as advertisers, “...we get excited about doing something new but fail to create a sufficiently strong link between the new idea and the brand’s existing assets, so it fails to ‘stick’,” she says.

However, brands that referenced the show whilst subtly reinforcing their own identities feel a bit more effective. This is what John Bartle, one of the founders of advertising agency Bartle Bogle Hegarty calls ‘imaginative repetition’. 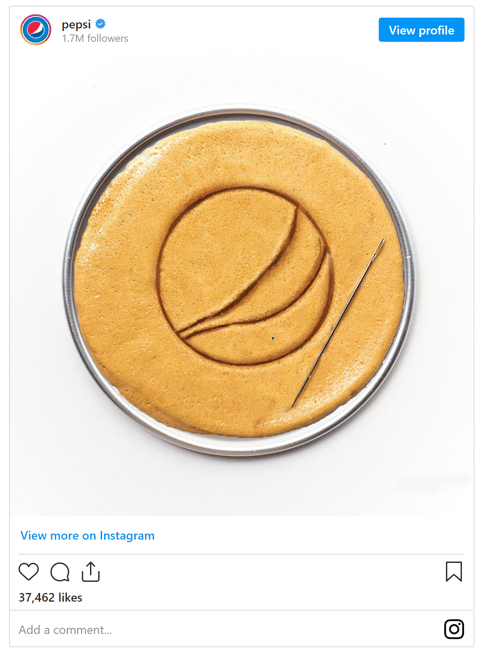 Obviously, the bigger the brand - the larger the reach. But regardless of your size, there is some proven cognitive thinking behind going viral.

The science behind catching on

In his book, Contagious: Why Things Catch On, Jonah Berger outlined six steps that will lead people to talk and share:

Triggers - generally, we talk about things that are freshest on our minds.

Ease for emotion - basically: when we care, we share. If it’s scratching that physiological itch, we’ll likely pass it on.

Public - when we can see other people doing something, we’re more likely to imitate it as well. Simple as that.

Practical value - news you can use: we share information to help others.

Stories - as humans, we like to share things that are wrapped up in stories or narratives; we’ve written more about why we tell stories here.

Putting the puzzle together for brands

So, can marketing ever be as popular or engaging as the games it’s imitating? It’s debatable. Still, there’s certainly a lot we can learn from the viral success of Squid Game and Worlde. Just remember these five letters (clue: it’s fundamental).

B - Be yourself
As brands battle to stay relevant, there’s always a temptation to ride the coattails of the latest trend. But never do so at the expense of your tone, image or assets. Don’t lose sight of who you are and what your customers expect from you. Connections are much more meaningful than clicks.

A - Attention is earned
Wordle caught on because it doesn’t demand your attention. Instead, it offers a great user experience without the usual compromises we’re forced to pay, e.g. endless notifications or in-game purchases.

S - Scarcity and simplicity
Think of Wordle’s one game a day functionality; the idea of scarcity works when there’s something worth waiting for. Because doing one thing well is better than throwing everything at a campaign.

I - Iconically intriguing
Those yellow and green squares or that unforgettable combination of shapes are visual identities that are as immediately intriguing as they are iconic.

C - Creativity (never sacrifice it)
When everyone else is churning out content without a second thought, take a step back and ask yourself: how can you be creative with the brand assets you already have? Remember Bartle’s ‘imaginative repetition’; you don’t have to reinvent the wheel to be clever and creative.